Deacon Jeff Drzycimski (driz-ZIM-skee) and his wife Bess have been happily married for 30 years. They are the proud parents of nine children, all of whom are homeschooled.

Deacon Jeff was born and raised a Catholic, but strayed from the church as a young adult. After a “born-again” encounter with Jesus, he started searching for the one true church that Jesus Himself had founded in the Bible. He began with the writings of the early Christians. It didn’t take long before he discovered that the church he had left behind — the Roman Catholic Church, the same church in which he was baptized, received first Eucharist, and Confirmed — was that very Church.

Deacon Jeff returned to the Faith with a newfound love of Christ and His Church, and an enthusiasm for the truth. He developed a great passion for defense-of-the-faith issues and apologetics. After attending a Cursillo three-day weekend, he recommitted himself — and his “fourth day” — to finding God’s will for his life. This eventually led to his ordination as a permanent deacon for the Diocese of Memphis in Tennessee in April of 2008.

Currently the good deacon serves at St. Louis Catholic Church in Memphis, Tennessee. He has been a regular keynote speaker at the city’s weekly St. Leo’s Lunch and St. Lucy’s Lunch, as well as at many other events. He is happy to travel and speak to audiences anywhere.

Professionally, Deacon Jeff has been a video producer for more than 30 years, specializing in marketing and training presentations for companies like FedEx, International Paper, and ServiceMaster.

Deacon Jeff, Bess, and their children are members of St. Louis Catholic Church in Memphis, Tennessee. 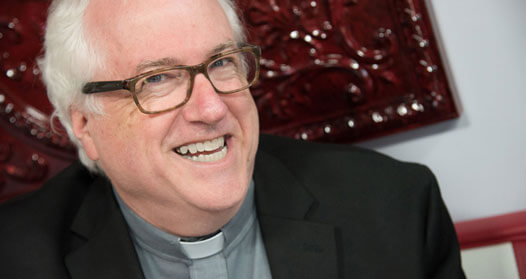